In 2014, Rodale Institute established an organic farm on the Anderson Campus of the St. Luke’s University Health Network in Easton, Pennsylvania to offer healthy, organic produce to patients and staff. The 11.5 acre farm grows thousands of pounds of high-quality, organic produce for distribution to all ten of St. Luke’s campuses in the region.

Stephanie Zimmermann-Schmitt, aka Farmer Stephanie, is the Project Manager at St. Luke’s Rodale Institute Organic Farm, an innovative farm that is pioneering healthy eating from farm to hospital. We got the chance to talk with her and learn about the farm and her experiences there.

Q: Stephanie you’ve been part of the St. Luke’s Rodale Institute Organic Farm since it began in 2014. What would you say are the key lessons that you and your team have learned?

A: This is the seventh growing season, and we have learned so much.One of the biggest challenges from the beginning was the newness of the Farm to Hospital model. When you think about the different needs of all the people the hospital kitchens are serving, it’s huge! You have visitors, staff, and patients with dietary restrictions. You think about the process from farm to kitchen to distribution to a wide hospital network. It’s a lot more time intensive to cut up cabbage and put it in a bowl then it is to just open a bag and pour it in. It’s a cultural shift for the kitchens. We realized early on that we both had to understand how to make it work better. We started having planning meetings with the kitchens. That led to knowing we should grow more red tomatoes that could be sliced on a commercial slicer, and broccoli that could easily be cut into florets. We also came to understand that we needed to meet people where they were – like with more basic veggies that people understand and are more accustomed to. The partnership between St Luke’s and Rodale Institute was really important in the success of the farm. Rodale Institute brought the farming knowledge and expertise and St. Luke’s was committed to building the infrastructure, and being open to understanding how we farm and what we need to grow at these volumes. I don’t think there are any hospitals doing it at the level that we’re doing it here at St. Luke’s.

Q: How did you first learn about Rodale Institute and where did your interest in regenerative agriculture begin?

A: My dad was on a farm in Pennsylvania that my grandparent’s bought in 1936. I grew up in D.C. and when I was growing up, I hated coming to the farm because I wanted to be “free” to roam around D.C. Years later, my husband and I were in Oregon trying to figure out what to do, and we realized that we had 60 acres back in Pennsylvania that we could be working on, so we moved back. When I got here, I started looking around and doing some research and when I saw Rodale Institute's mission, I said: “That’s it! I want to be involved with them.” I contacted a few people and exchanged emails with Jeff Moyer, who is now the CEO. I’d ;never farmed before, but I wanted to intern and learn everything that Rodale Institute was doing. I was also working a part-time night job. I would come to the farm in the mornings and then go to my night job in the evenings. Once, I was washing a head of lettuce and the Executive Director at the time said to me: You need to meet Farmer Lynn” and that’s when I went over to the farm at St. Luke’s and she hired me on the spot. Every season after that first season, I would work at Rodale Institute, and eventually Lynn created the assistant farm manager position which led me to where I am now.

Q: What do you have on your family farm?

A: We raise hogs and steers and have our own retail meat business. We also co-farm with our neighbor who grows corn and we buy it back from him and make our own feed for our animals. So, I guess you could say I do vegetables by day and livestock by night! 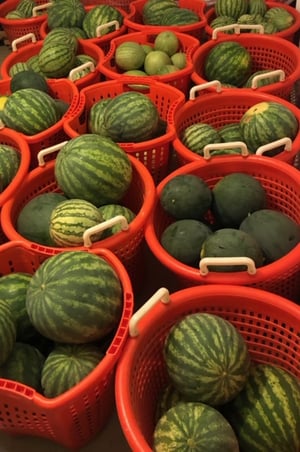 Q: You grow over 100 varieties of produce on the farm. Are there any surprising fan favorites from the community that you serve at the hospital?

A: While each hospital campus is different, I’d say that our signature crop is definitely cherry tomatoes. Everyone looks for those and loves them and asks: When are they coming? We have started to do edible flowers and that’s been really well received. Kohlrabi is being discovered. We are trying to introduce more veggies to people. In our CSA (community supported agriculture) shares that go to the hospital staff and patients, we do sunflower shoots and buckwheat which have been a hit. We started that last year and people are excited about it.

Q: The farm has grown considerably since it began.  Do you want to talk about how it’s grown; and what you are most proud of and excited about?

A: The first year they had this plan of this many pounds of cabbage and carrots and so on– without realizing that they were all going to come in at the same time. Seasonality is a thing in farming! So, I think we were overwhelmed in the beginning. Then, we started having planning meetings with the kitchens all the chefs and the General Managers to discuss what worked and didn’t work. What they’d like to see and what they could handle. We could incorporate variety: 100 pounds of this and that and then we worked together to strike the right balance. The very first year, we started out with five acres and then in the second year, we acquired eight more acres. When we first started farming it, we struggled with how to produce on it. The soil didn’t have the nutrients that we needed. So, we did three full growing seasons cover-cropping the land. I did a lot of the tractor-work which I love, and I really took on cover-cropping and I’ve been proud of watching the land and soil change every year and watching the returns change every year. It’s been incredible literally watching the fruits of our labor.

The CSA program is also really growing from 38 members originally to 175 members this year. What’s happening is that people feel like it’s their farm and they want to support it. St. Luke’s is making it part of their culture too. Patients are actually prescribed a CSA share as part of one of their programs.

Q: Do you have any advice for people who want to be healthier in their daily lives, and they don’t know where to begin?

A: Sun gold cherry tomatoes are the gateway vegetable! It really begins with convincing people of the difference in flavor and then that it doesn’t have to be that hard to cook. There are many veggies that you don’t have to peel or cook. People get overwhelmed. Once you get yourself in the pattern of eating well, you realize how much better it is. I am a big believer in getting people to support their local farmers and why it’s important to keep your money local. COVID has helped with that because people lost trust in the larger food system – both safety and availability. I tell people to take it step by step. Get some carrots from the farmer’s market and then some lettuce. It’s the same thing as working out or exercising. You realize all the benefits once you get a new pattern established.

Q: Any misconceptions that you think people have about farming (regenerative ag/organic) that you’d like to clear up?

A: I think regenerative ag is a new term for the general public. It will take time for people to get there, but with organic, there’s awareness there and many people mistakenly see it as bureaucratic and a way for farmers to get more money. There are so many small farms who are doing organic simply because it is the best way to produce healthy food and that’s what they want to share. It’s genuine. That’s how it started for Rodale, too – caring about people’s health. St. Luke’s sees the value and importance of healthy food first-hand.

I’d say the other misconception is that people don’t really understand what farmers do. When I tell people that I hoed a 150-foot bed, I get blank stares. People wonder why would you do that? It can be hard to relate in day to day life when it comes to talking about what we do and how we work the land and he soil.

A: The caliber of leadership from both Rodale Institute and St. Luke’s really makes this possible. It wouldn’t be successful without the commitment and passion from both of our teams. We still need to build more awareness about the work we’re doing and get the word out there. We love to have people come and visit the farm. Come see us and see first-hand what we’re doing.

Rodale Institute is one of Bluestone Life’s non-profit partners.  At Bluestone, we’re a member of 1% for the Planet.  So, your premiums benefit high-impact non-profits like Rodale Institute that are working diligently for positive environmental and social change. We also provide a complimentary additional death benefit which you donate to the nonprofit of your choice.

Bluestone encourages the Practical Activist in all of us to get involved in your community and support organizations like Rodale Institute and St. Luke’s University Health Network that are creating solutions every day for healthier, local and sustainable food systems.

Trustees for Alaska: Protecting the land with life insurance